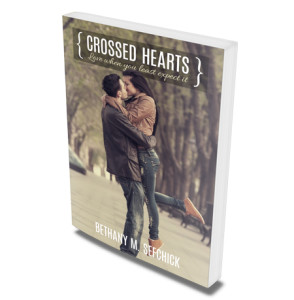 On a cold and rainy February evening, six strangers pass each other in a city crosswalk, all of them lonely and searching for love.

Author Brooks Anderson has a failed marriage and an empty life. Is nearly homeless former museum curator Lily Frampton the one that can complete him or is she just another person passing through his life? Is he willing to take the risk and find out.

Former photographer Fox Harrison has returned to the place where his life went horribly wrong, ready to indulge in a little self-pity. That is until he meets Colleen Fitzgerald, an interior designer who just might be the woman to turn his life around in more ways than one.

Sara Price hates her job working for an old man in the city, especially the commute back and forth to the suburb where she lives. Her dream is to run her own greenhouse, but it, along with a relationship with her sexy neighbor Eli Miller, seems out of reach until an unexpected gift shows her that dreams can come true.

Emma King is in a diner preparing to meet the man she’s been chatting with online for over a year, but is chef Charlie LeVallier really the man for her? And if he is, can both of them overcome their doubts about a relationship born online and moved into reality?

Darcy King has been during a crush on her neighbor Ranger Collins for months now and a burst pipe presents her with an opportunity to take a glance into his world. But is she prepared for what she finds? And is Ranger ready to let her in?

Declan Crane has been in love with his assistant Cassandra Shaw for years now, but now, she’s hinted that she wants to leave. She says it’s just a vacation, but is it really? Cassie has devoted her life to Declan and all she wants is some hint that the man she loves cares for her as well. Is the threat of her leaving enough to force the two of them to take a chance on a relationship?

This 68,400-word novel is written in the modern romance style for a slightly hotter read. It may not be appropriate for younger audiences.